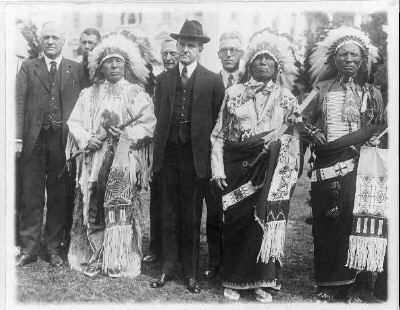 Indians occupied an unusual status under federal law.
Some had acquired citizenship by marrying white men. Others received citizenship through military service, by receipt of allotments, or through special treaties or special statutes. But many were still not citizens, and they were barred from the ordinary processes of naturalization open to foreigners. Congress took what some saw as the final step on June 2, 1924 and granted citizenship to all Native Americans born in the United States “BE IT ENACTED by the Senate and house of Representatives of the United States of America in
Congress assembled, That all non citizen Indians born within the territorial limits of the United
States be, and they are hereby, declared to be citizens of the United States: Provided That the
granting of such citizenship shall not in any manner impair or otherwise affect the right of any
Indian to tribal or other property. (Approved June 2, 1924)”